For families, we offer a 5% discount. Please email artsacademy@pcpc.org to get the discount code BEFORE registering online. 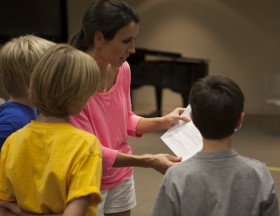 Laurie Hargrave is excited to be a founding member of the Park Cities Players. Laurie performed professionally in NYC for over a decade and relocated to Dallas with her husband, Taylor, and two beautiful children, Hunter and Atlee, two years ago. Laurie has traveled to 48 out of 50 states performing in the 25th Anniversary National Tour of “Evita” (directed by Harold Prince), the National Tour of “Camelot” and “The Pirates of Penzance”. Laurie performed in the original production of “They All Laughed” at the Goodspeed Opera House, “A Little Night Music” at Sacramento Music Circus and The Bristol Riverside Theater. Her favorite performance to date… “The Pirates of Penzance” at City Center in New York City, where Laurie met her husband, Taylor. He was playing a ruthless pirate while she was playing a damsel in distress, they have been married for nine years. Laurie graduated from the opera program at Indiana University with a Bachelor of Music in Vocal Performance.